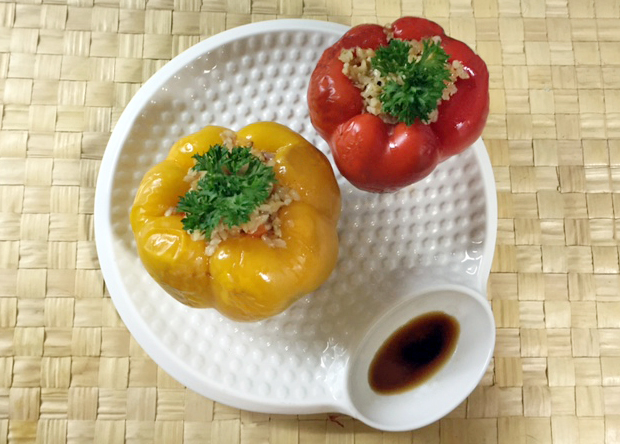 Here’s some good stuff for the weekend, if you’re fond of eating:

Take two bell peppers or capsicums, core them and grill them on an open flame till they are lightly charred and the skin just about starts peeling. Set them aside.

Put some quinoa on the boil (brown rice is a good alternative).

And while that’s happening, fry some finely chopped red onions and grated ginger in olive oil, till they’re caramelized. To which add a little orange and pineapple juice (or a ready citrus marinade). Then, chopped tomatoes, which take care don’t become mush. Some fresh rosemary, whole peppercorns for bite and sharpness to offset the sweetness of the onions-ginger-citrus, and thinly sliced black olives. And of course, salt to taste.

Once the quinoa is done, mix the grain with this so that the flavour is evenly distributed.

Stuff it in the bell peppers. Top off with some pine nuts and garnish with a sprig of parsley. Serve it with a dab of balsamic on the side.

And then stuff yourself with this as an accompaniment to some grilled chicken, maybe. It’s smoky to begin with, then sweetish when you get a mouthful of quinoa and it’s got a sudden, sharp, surprising sting when you bite into a peppercorn and believe me, it’s molto bene – not Italian – but still pretty damn good!