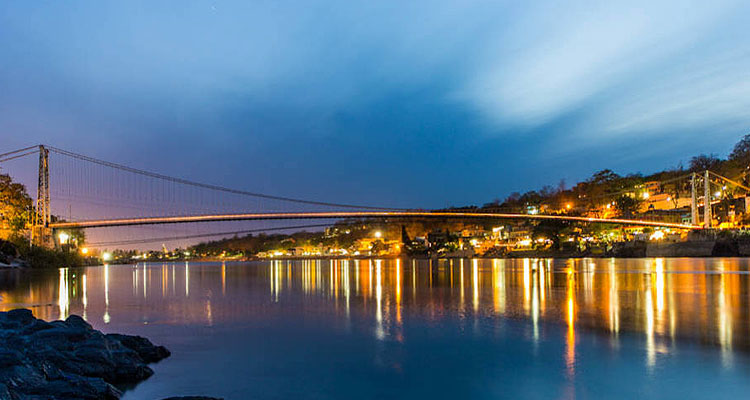 It’s my haven. My sanctuary. My sanity, my solace, my succour.

I’m talking about the small town of Rishikesh, at the foothills of the Himalayas, and through which the Ganga flows. Ever since I discovered it – quite by chance I might add, when I was holidaying at a rather swanky spa retreat – it has utterly captivated me. So much so, that I’ve made it a point to revisit at least once every year. And I’m back again, as I post this. Just me, by myself.

I was last here earlier in the year, with my wife and a bunch of other friends. Their idea was a holiday with trekking and rafting and eating & drinking and day trips to other hill-stations in close proximity. Mine was connecting with my inner self. Needless to say, it didn’t all happen for me – what, with 6+ city couples out to have a fun time in the hills! I would secret myself away whenever I could, but my soul needed more. And so, here I am! Eliciting arched eyebrows from the family and friends: “What? Again? Alone?”

I’ve been used to many a look of amazement, bemusement, amusement, so the many incredulous exclamations are water off a duck’s back.

I have no agenda. Except for sitting back and contemplating. And connecting with the Spirit. Perhaps writing, if the mood catches me.

It’s dirty, even by Indian standards, and noisy – so the ‘silence’ I experience here is of a different, deeper kind, maybe more mental than auditory. It’s crowded, but except in the bazaars, not aggressive or ‘in-your-face’, so if I’m just sitting by myself, I won’t have people trying to hawk me something I don’t want – maybe they’re more used to meditating fakirs (and zoned-out hippies). There’s a lot of yoga going on – it’s the yoga capital of the world – both, the serious, traditional kind, as well as the more commercial. There are ashrams aplenty. More temples than you can count. And then there’s the river. Rapids upstream, calming somewhat into a benign flow further downstream.

For me, it’s the complete package. It’s a getaway. From the city, from this world, of which I am otherwise a mostly willing part. I get time to myself. And there’s nothing better. Much as I am a big-city guy, nature appeals to me. As does spirituality. And I find them both here. And a certain ‘X factor’ that places like this seem to have – I believe there are other such spots like Mt Kailasa in Tibet, Uluru in Australia, Mauna Loa in Hawaii, Lake Titicaca in the Andes, Sedona in Arizona and many more that the ancients and the indigenous peoples held sacred. Suffice to say, believer or not, there’s an energy one can feel. And that energy is rejuvenating for me.

So I’m here. For the next few days. Detox-ing my mind and soul. Again. And alone.

And I’ll be back for more, I know. Again. And alone.

And read about my first time here:- Bridge Across Time