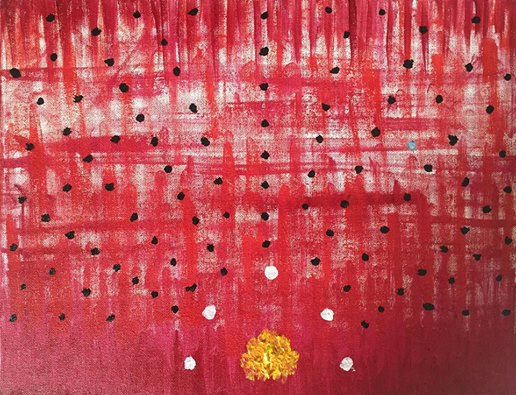 My first attempt at painting on canvas, so be nice, guys! 🙂

It’s a creative interpretation of the Mahabharata, the great, ancient Indian epic. For those who might not be familiar, it’s an allegorical spiritual story, within which is embedded the Gita – the discourse given by Lord Krishna and one of the sacred Hindu texts.

Anyway, so the red is the bloodied battlefield of the mind, with the five white dots representing the goodness of the Pandavas or the 5 senses; the 100 black dots, the evil of the Kauravas or vices and the golden burst at the bottom, Lord Krishna who represents the intellect. The grey dot was actually a mistake but I added it to represent Karna, or desire, who is brother to the Pandavas and is meant to propel you upwards and forward but fights for the Kauravas – as it is in real life where it ever so often falls prey to vice.

I had fun doing this. Hope you like it!